We have been escorting travellers to Mallorca for the past 10 years and have created a popular tour that allows visitors to explore this beautiful Mediterranean island using its wonderful narrow gauge railway network. It provides the basis for a fabulous private group tour enabling members to discover the stunning scenery, culture and hospitality that this Balearic island has to offer.

Morning flight from preferred regional airport to Palma. Coach transfer to city centre hotel where we stay for 5 nights with breakfast included. We also include a welcome dinner at the hotel.

After breakfast we take the train across the island to Manacor, the island’s second city and home of the artificial pearl industry. Away from the gift shops, the town has lots of narrow streets with large houses and churches which are worth exploring. As the rail tickets are issued on an individual basis you can return to Palma at any point and spend the afternoon exploring the capital of what is the largest of the Balearic Islands. The old town is a must with the Gothic Cathedral and Moorish palace just two of the sights worth seeing. West of the city, hilltop Bellver Castle is a medieval fortress with a distinctive circular shape. At this time of year the weather should be warm enough to take a stroll along the seafront with its tree lined promenade and marina.

A day out on the Soller network which is over one hundred years old and operates with historic rolling stock. First we travel on the 27km long Soller train from Palma through the Sierra de Tramuntana Mountains to the north of the island. The train terminates in the town of Soller which, with its warren of narrow streets, is still charming in spite of the tourist influx. After a break to explore we continue by tram to the port of Soller. The tram was originally designed to carry passengers but has also been used to transport goods such as fish. We return to Palma by the same tram and train route.

Leaving Palma after breakfast we take a short train journey to Inca, the third largest town on the island. All of the lines on the island were originally 914mm narrow gauge lines, but, except for the lines run by Ferrocarril de Sóller S.A., have since been converted to 1,000mm gauge. Inca is well worth exploring and Thursday is market day showcasing the local leather trade. After a break, carry on by train to Sa Pobla which is very rural and well off the tourist trail.

We have a private coach for the day and we head right across the island to the north east tip. Firstly we visit Pollença with its delightful light coloured stone houses and main square where its cafes invite us to linger! There are many small galleries and shops in the narrow streets and for the energetic the best view of all can be found by climbing the 365 stone steps to Calvari chapel. From here we continue by coach the short distance to the port itself with a wonderful promenade and stunning views over the Formentor peninsula. Return by coach to Palma.

Coach transfer back to the airport late morning for an afternoon flight back to preferred regional airoport. 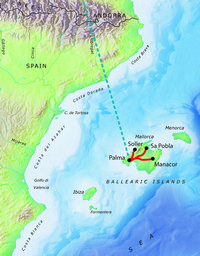 Please note - hotel can be subject to change

Ffestiniog Travel provides 'out of hours' support for all independent travellers in the event of an emergency.